No Ads, No Tracking Software, No Cross-Site Requests. Scramblerz is a socially motivated project dedicated to protecting privacy online 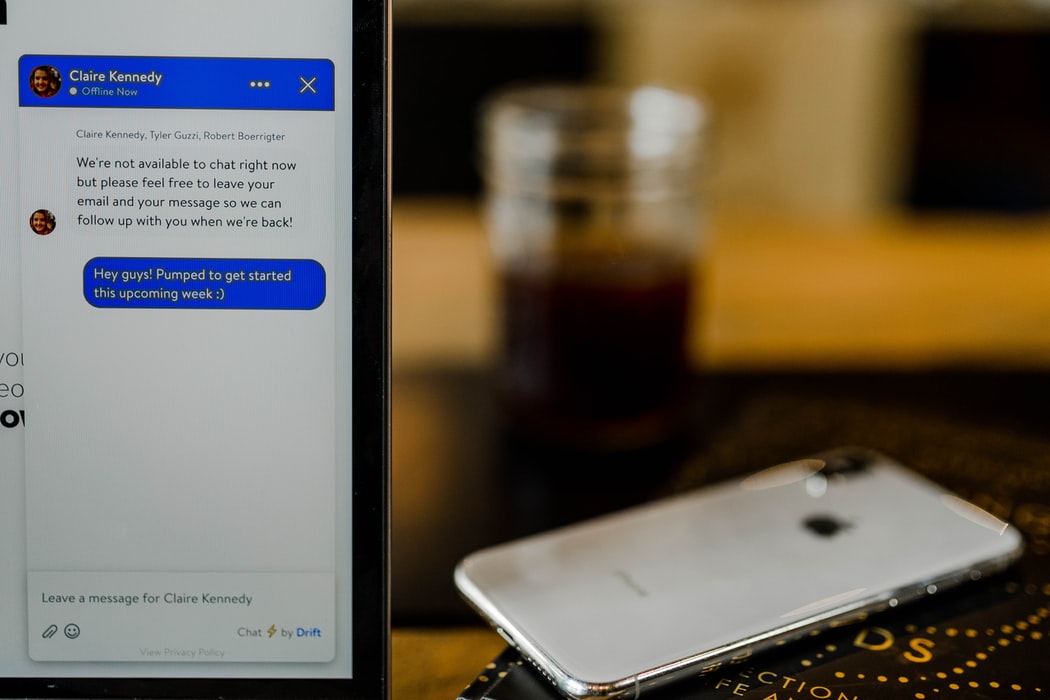 Today personal data security is becoming an increasingly important issue. No matter how much you insist on seeing the world around you through rose-colored spectacles, you have to admit that there are things in your life that need protection. Private correspondence is definitely one of them. Whatever the Whatsapp or Skype devs say, their products are not what you would want to use as an anonymous texting iPhone app. We all know that they keep all correspondence logs on remote servers. Which means they can be perused at any time.

Sure, someone can say that you are just being paranoid, but as one smart person once said, “Just because you’re paranoid doesn’t mean they aren’t after you.” That’s why I’ve prepared a list of best anonymous texting apps for you to use today. They’ll work best for iPhone users who worry about personal information leakage or just don’t want to make it available to any third parties.

Why do you need an anonymous texting app?

Sometimes it seems like there is little to no anonymity online. You won’t believe how easy it is to gain access to your personal information. Even if you have nothing that can potentially interest any intelligence services, trust me, there might be many others who can find your personal data valuable. Business competitors, ill-wishers of all kinds, hackers who want to use confidential data for personal benefit.

Now, it’s important to understand that there are two kinds of anonymity online, social and technical:

2. Technical anonymity is a trickier subject. Basically, it’s about the set of data used by technical equipment and software. This includes your phone number and your email address, for example.

And while it’s easy to maintain your social anonymity (all you have to do is stop publishing your personal info), technical anonymity is a matter of some effort.

With that being said, I’m not here to fearmonger. On the contrary: there are ways to draw a discrete veil over your personal data. One of these ways is using apps for anonymous texting. Read on to learn more about them! 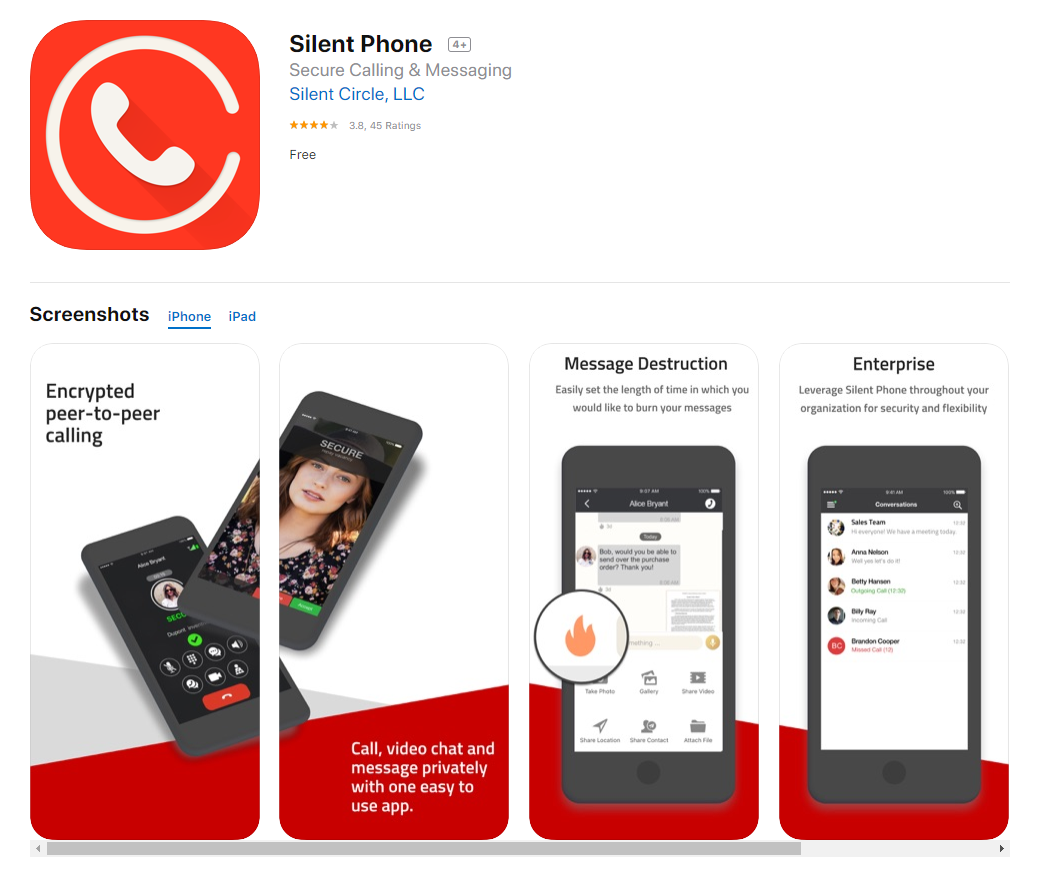 Silent Phone is an app for making secure calls, video calls, and anonymous messaging. The app was created by a Canadian company called Silent Circle in 2012. Today it’s one of the most well-protected messaging apps that allows users to chat and exchange data anonymously both via voice calls and text messaging.

What anonymity fans might find interesting is that all communication happens within the Silent Phone network only. This means that data transfer is protected and encrypted at all times. You can even have anonymous conversations with people who don’t use the Silent Phone app. However, to do that, you’ll have to use the paid tool called Out-Circle Access. 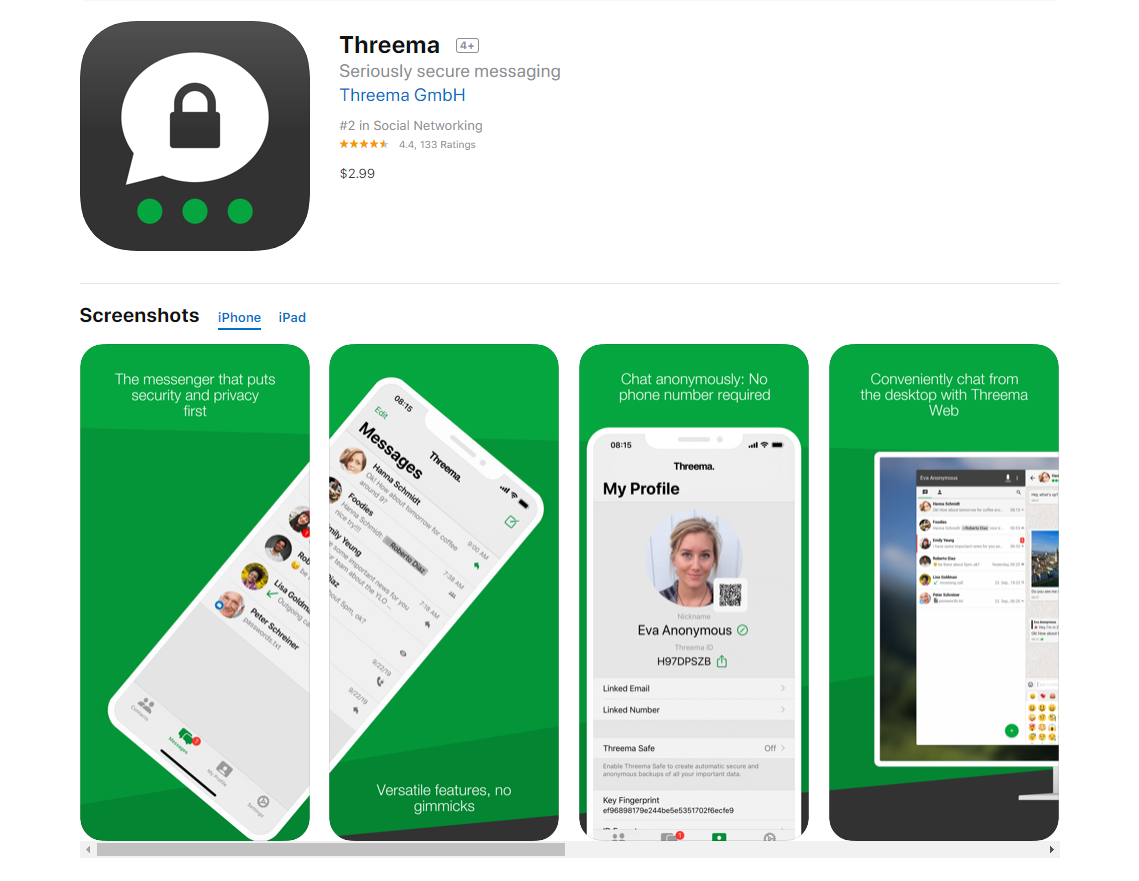 Threema is a brainchild of Swiss developers and one of the most popular apps for those who value anonymity above all. To download it, you’ll have to shell out whopping $3, but this will help you rest assured that your correspondence is totally secure. For example, when you start using the app, you must touch your phone screen with a finger to generate a unique ID code.

What can this app do? Everything you’d expect from a modern messenger. Sending/receiving text messages, voice, and video messages, sharing your geolocation, photos, and other files, creating group chats. 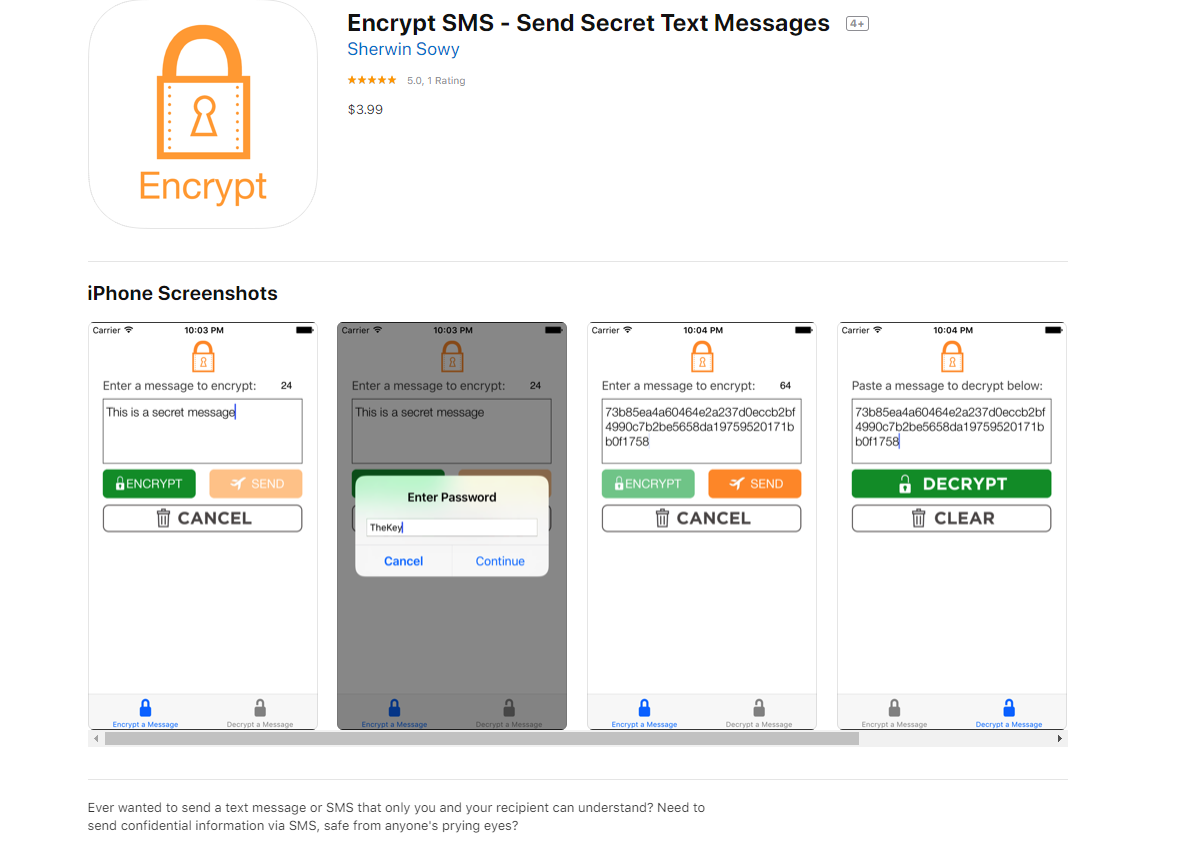 In case a standalone anonymous messenger isn’t your cup of tea, you can use a more simple app that encrypts any text messages you’d like to keep secret. Encrypt SMS is one such app. <br>
Sure, you’ll have to cough up $4 to be able to use it. But one of the great things about it, apart from its refreshing simplicity, is the fact that you don’t need an Internet connection to use it. The app works perfectly fine offline and turns your text messages into an unintelligible set of symbols for anyone who’s not supposed to read it. 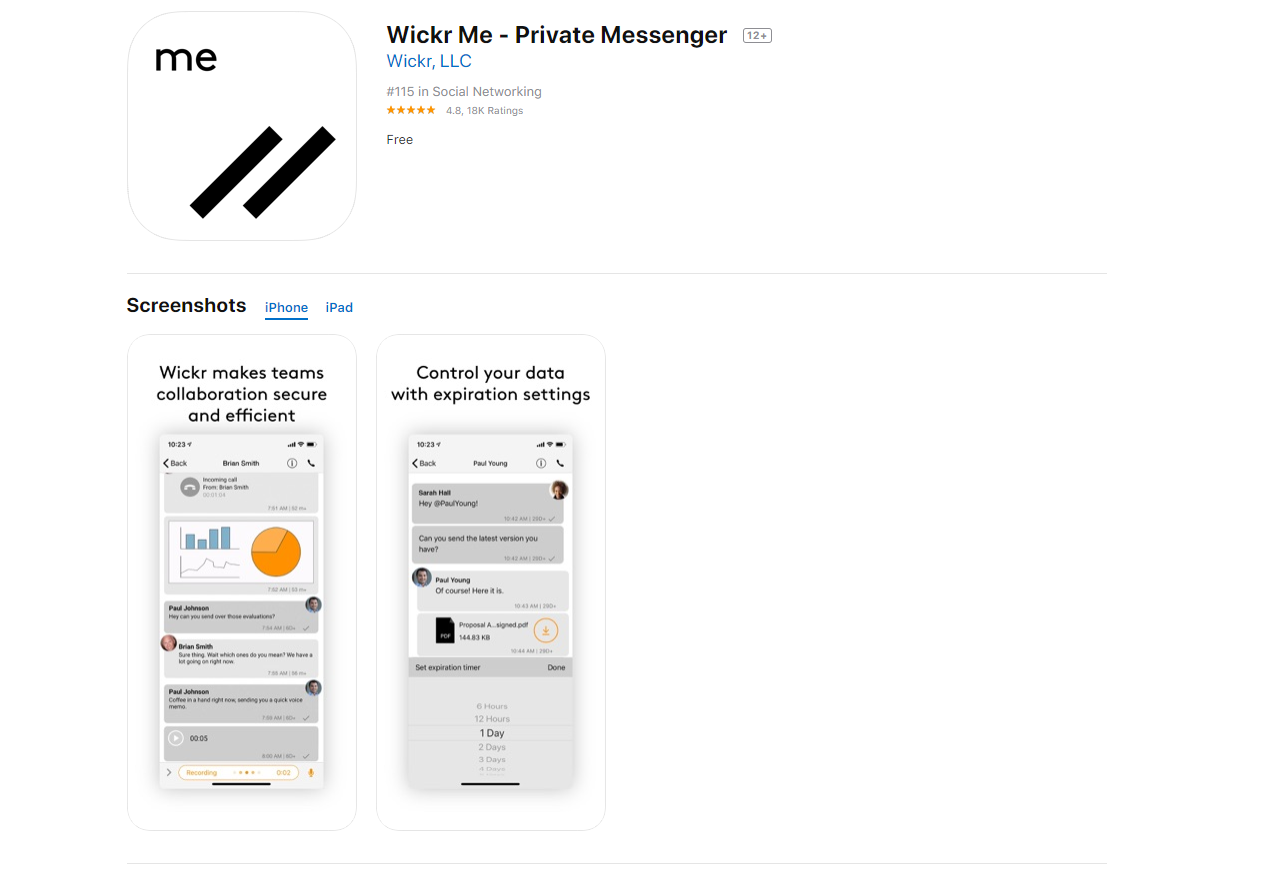 Wickr Me is an online IM app that surfaced in 2013. The app’s developers promise that their app is like no other private messenger. It offers 100% anonymity, total reliability, and leaves no trace either on devices of data servers. As always, it’s for you as a user to decide how much of this is true. 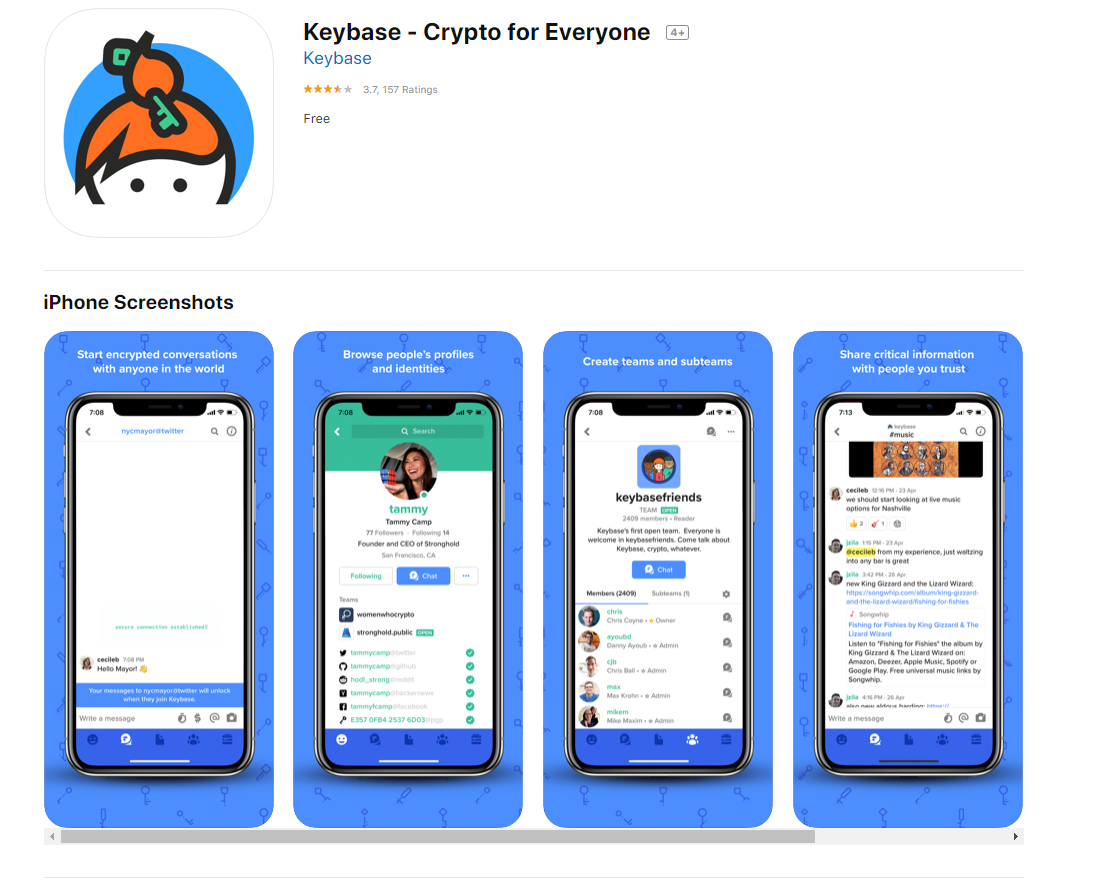 Keybase is a relatively new private chat app with open source code utilizing public-key encryption. The app can be downloaded for free from the App Store and offers a clean and simple user interface, which is a definite bonus for those who don’t like unnecessary bells and whistles.

Another great thing about this app is that it can support conversations between people from any part of the world without using phone numbers or emails. Considering it’s a free app, Keybase has decent functionality and has no annoying ads. For example, you can use Tor’s anonymity function in the command line, as well as hashtags and ats (mentions). You can create groups and get many other interesting options for private messaging. 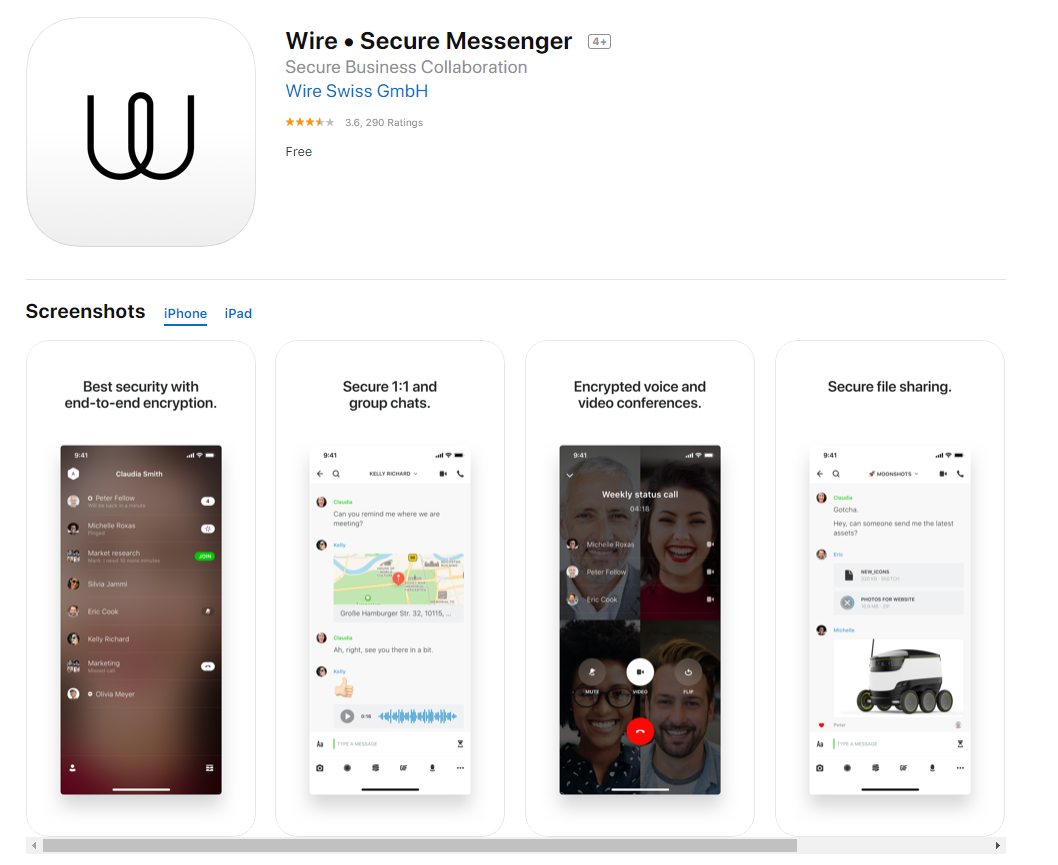 Wire company was founded in 2012 by former Skype developers and under the support of Skype co-founder. The first version of the Wire app saw the light of day two years later, in 2014. And while at that point the developers spoke of the incredible clarity of voice communication as its main advantage, later the app got the long-expected end-to-end encryption. Now all video calls and messages get encrypted so that only a sender and a recipient can gain access to confidential information.

When it comes to functionality, Wire has a pretty standard set of options. Text messaging, voice calls, media files transfer. There is also an option of group chats and group calls for up to five participants. 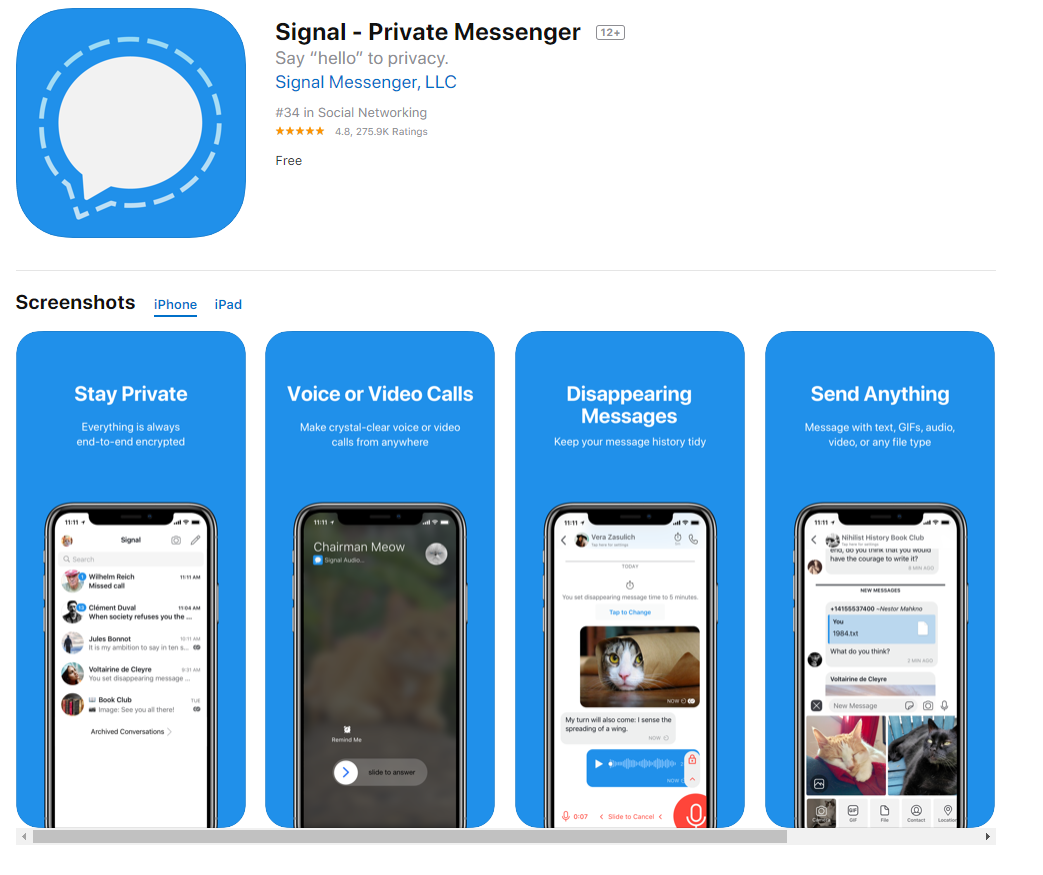 Signal utilizes the ZRTP encryption protocol and an AES algorithm with a 128-bit key. It might be hard for laymen to understand what that means, but professionals agree that this kind of security is very hard to bypass even using special equipment.

It should be noted that Signal requires using your phone number during registration and requests access to your contact list. Even though the app’s security protocols are quite serious, this lack of anonymity raises some doubts. 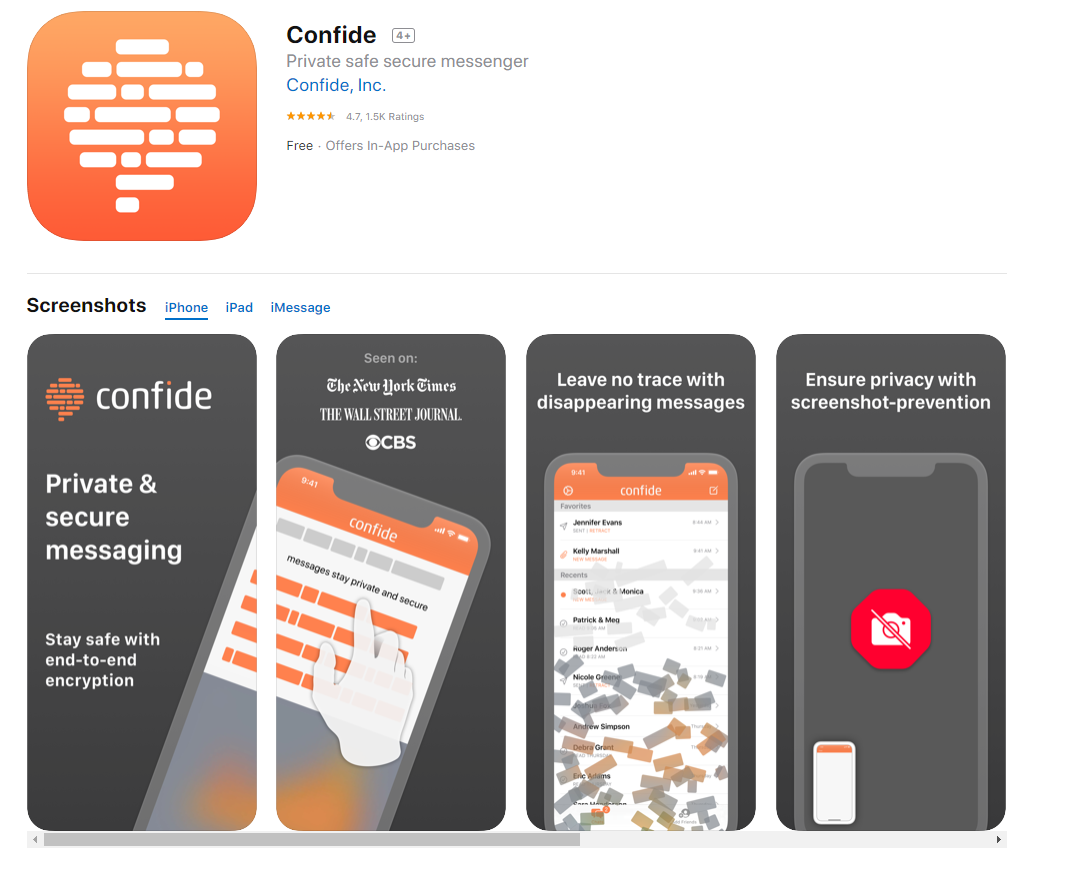 Confide is one of the less-known private messengers, but it doesn’t make it less interesting. One of its curious features is the combination of end-to-end encryption and an unusual system of hiding messages right on the phone screen. When you get a message, all you can see is a bunch of rectangular shapes. To read it, you must run your finger over the screen.

While Confide brings privacy and security to a whole new level, it’s hardly intended for a mass user and is more of a niche product. Because it’s not very convenient to use during active messaging and chatting, it’s perfect for sending short secret messages when you want to keep your privacy.

Of course, this list of private messengers that offer anonymous communication and high-level security is far from being complete. Privacy and security of personal data are in high demand nowadays and application developers hasten to satisfy this demand.

In case texting that’s truly private is of uttermost importance to you, I recommend that you do your research. Find out what kind of encryption protocols and algorithms are being used and how private texting apps utilize encryption.

But no matter which application you end up with, good luck!